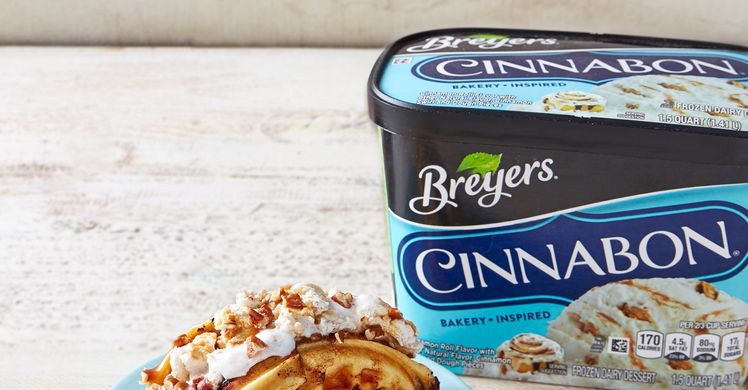 There’s no better way to cool off in the summer than with a delicious bowl of ice cream, right? Well, buckle up ice cream fans because Breyers just unveiled one of the best collabs ever and it’s with Cinnabon! Makers of the World Famous Cinnamon Rolls have joined forces with Breyers to create a delicious Breyers Cinnabon-flavored ice cream and you have got to try it.

The frozen dairy dessert features a sweet cinnamon base, gooey cinnamon swirls, and tasty dough bites mixed throughout — we can’t think of anything more perfect! New Cinnabon-flavored ice cream is already rolling out nationwide in major retailers and has a suggested retail price of $3.99 per container.

To make the launch even more exciting, Breyers and Cinnabon are releasing three delicious recipes so you can enjoy your ice cream in a unique and fun way! You can get the full recipes on Breyer’s website and be sure to tag “#BakeWithBreyersCinnabon” when you post your tasty creations on social media. Check out their unique recipes below:

Now you can eat tacos for dessert with this ice cream waffle tacos recipe! Transform a sweet cinnamon roll into a waffle taco and fill it with the new Cinnabon ice cream! Make this dessert extra special by serving it with toasted pecans and a caramel drizzle. Get the recipe HERE.

What better way to enjoy Breyers new Cinnabon ice cream than to scoop it into a Cinnabon-inspired cinnamon roll ice cream cone! Get the recipe HERE.

Calling all coffee lovers this Affogato has your name written all over it. Combine Breyers’ new ice cream with Cinnabon-inspired cinnamon roll coffee and garnish the dessert with cherries and chocolate shavings — delicious! Get the recipe HERE.