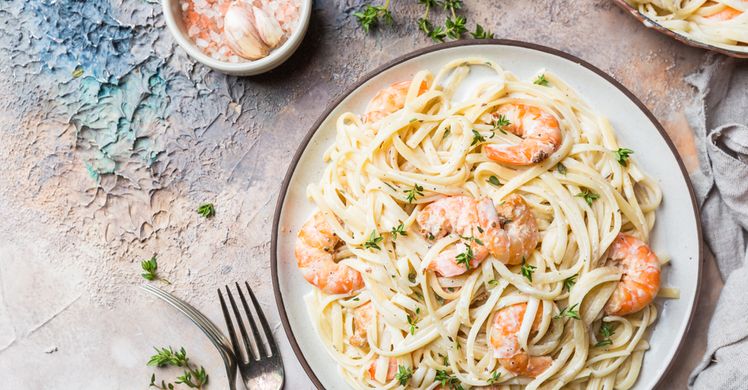 Foods You Should Avoid While On The Keto Diet

Some may have been lured into the keto diet for weight loss, while others may have been attracted to the idea of indulging in cheese, bacon and other sinfully delicious keto foods. I mean, it does sound it enticing, doesn’t it? However, not all keto-friendly foods are created equal. It’s important to keep in mind, that just because some foods may be keto-friendly doesn’t mean they’re good for your health.

The goal of the diet is to put your body into a metabolic state called ketosis. By restricting your carb intake, your body will then breakdown stored fat. Instead of being fueled by carbs, you’ll now be fueled by molecules called ketones. However, the key to staying in this metabolic state is fueling your body with the right foods. So we searched the web to find you which 12 foods you definitely shouldn’t indulge in while following the keto diet.

Wait, I thought the saying was, “an apple a day keeps the doctor away”? This may be true but not for the keto diet.

An apple can actually disrupt ketosis and in result, force you to derail your diet. This is because, in just one medium-sized apple, you’ll consume more than 20 grams of net carbs.

A ripe banana not only offers its sweet flavor but many nutritional benefits too. For starters, it’s a great source of potassium, vitamin B6, and vitamin C.

Along with their wonderful nutritional benefits, they also come with loads of carbs. Bananas can contain anywhere from 16 to 30 grams of carbs depending on the size. They may not be unhealthy per se but they certainly are not keto-friendly.

Rice is considered a starchy food which is a serious no-no while following the keto diet. Yes, this does include the ever so healthy brown rice too!

If you start eating rice while on the keto diet you’re body will get kicked out of ketosis. This can then confuse your body as it will struggle to find a fuel source. So be sure to stay clear of any type of rice!

Potatoes are one of the most commonly consumed dishes. Whether it be French fries, baked potatoes, tater tots or whatever tater side dish you love most, you can bet it’s often on the dinner table. However, there is no room for starchy vegetables on the keto diet.

If you’re fully committed to the keto diet you have to say no to potatoes and yes, even sweet potatoes too! This is because you’ll find a whopping 17 grams of carbs in a 100 gram serving of potatoes. This is enough to diminish your daily carb intake in just one serving.

When it comes to comfort food, bread is high up on the list! Bread is a satisfying snack whether you enjoy it fresh from the bakery or toasted.

When it comes to the keto diet be sure to stay clear of bread. You see, most common types of bread contain refined wheat, which is fairly high in carbs. Thankfully there are many excellent keto bread substitutes available such as this One-Minute Keto Mug Bread!

Just like bread, pasta is high up on the comfort food list. Not only is pasta comforting but it can be seriously crave-worthy too.

Sadly, all types of traditional pasta are not keto-friendly because they’re loaded with carbs. This does mean your beloved spaghetti, linguine, and fettucini are off the menu.

A warm bowl of oatmeal would be an excellent delicious, nutritious, and filling meal to start your day. However, if you’re planning on following the keto diet, a breakfast like this is not allowed.

Most professionals say that you need to stay between 20 and 50 carbs per day. The scary truth is that in just one bowl of oatmeal you’ll find about 27 grams of carbs. This is true for both old-fashioned and quick oats.

Beans are an amazing protein-rich ingredient. They’re also full of important vitamins and minerals. While they may be healthy, they’re definitely not keto-friendly.

Beans may be protein-rich but they’re also full of complex carbs and have little to no fat. Both of these are negative qualities when searching for foods to eat on the keto diet. Thankfully there many other wonderful protein sources you can eat while on the keto diet such as chicken, steak, pork, and more.

Candy bars can be very tempting especially when their bright packaging is staring back at you in the checkout line. However, it is honestly best to leave them there.

Sweets include any sugary treats such as candy, chocolate bars, and even gum! Sweets are not keto-friendly because they’re high in sugar, and many varieties are loaded with carbs too. Both of which can kick you out of ketosis. Plus, it goes without saying, sweets aren’t healthy anyway whether you follow the keto diet or not.

If you thought potatoes were the only high-carb veggie, think again! Much like potatoes, corn is a surprisingly starchy veggie that contains loads of carbs.

But it’s not the only surprisingly non-keto friendly veggie. Other high-carb veggies include carrots and even green peas too. Thankfully there are other low-carb veggies available so you don’t have to worry about missing on important nutrients.

Technically speaking, processed meats such as bacon and sausage are allowed on the keto diet, however, they’re often loaded with sodium so it may be best to limit your intake. Further, some processed meats are known to have starchy fillers. This is to help stretch the product but unfortunately means they have hidden carbs.

If you’re going to indulge in processed meats be sure to read the label and ensure that it is 100% meat. It’s also important to note that some cured meats are filled with sugar and also contain hidden carbs so once again, be sure to read the ingredients carefully.

Cracking open a beer after a long hard day may feel so rewarding but if you’re dedicated to your keto diet you’re going to want to think twice about that decision! Generally, a bottle of beer can contain up to 15 grams of carbs.

While drinking a bottle of beer may seem worth it at the time, once you get kicked out ketosis you may find yourself regretting that decision. The keto diet is hard work, and sometimes you want to indulge a little so when you’re really craving a bevvy try one of these Low-Carb, Keto-Friendly Alcoholic Beverages. 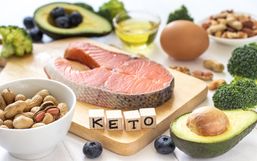 Common Mistakes You're Making On The Keto Diet
In short, the goal of the keto diet is to fuel your body with the right foods so that your body can enter a metabolic state called... 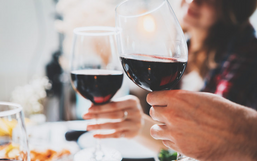 Low-Carb, Keto-Friendly Alcoholic Beverages
When it comes to a low-carb diet such as the ever-popular Ketogenic Diet (read more on that HERE). 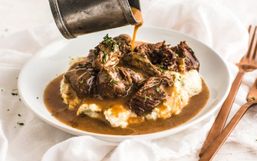 The Best Keto Recipes Using Cauliflower
Switching to any new diet can be difficult. Often, you're forced to give up the foods you love but I believe the key to success is... 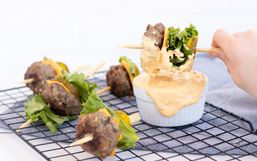 Easy Low-Carb (Keto) Big Mac Bites
These Big Mac Bites are absolutely drool-worthy and the Copycat Big Mac Sauce is spot on - you wouldn't even know it didn't come... 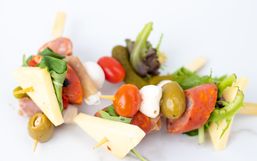 The Best No-Bake Keto Snacks
Whether you’ve been on the Ketogenic diet for a while now or are new to it, you’ve likely struggled with snacks. 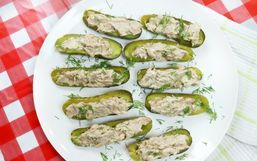 The Best Keto Recipes For Summer
Summer is in full swing and what better way to celebrate the warm weather than to dig into delicious food! 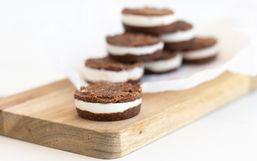 Creamy Keto OREO Cookies and Cream Fat Bombs
Fat bombs are an essential part of the Keto diet, allowing you to intake a large amount of healthy fats in just a couple of bites. 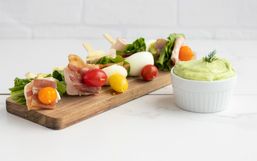 Drool-Worthy Keto Cobb Salad On A Stick
These little Cobb Salads on a Stick are all the deliciousness of a loaded cobb salad without the mess or need to sit down to enjoy... 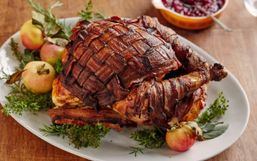 Keto Thanksgiving: Recipes For A Delicious, Low-Carb Holiday Feast
Thanksgiving preparation is hard enough, add in dietary restrictions and then the level of complications keeps rising. 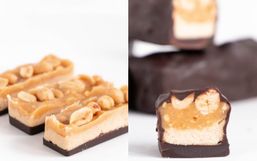 Keto Swaps For The Foods You Crave
Starting a new diet can be daunting and difficult and staying committed to that diet can be even harder. 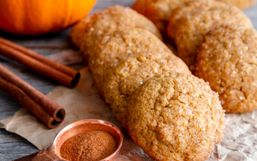 Pumpkin Spice Keto Snacks To Get You Through The Fall
There is a lot to look forward to in fall. For starters, the crisp air brings on beautiful changing leaves, apples are ready to be... 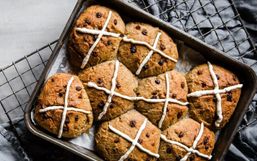 Keto Easter Recipes: Breakfast, Lunch, Dinner & Dessert Ideas
Holidays are great because they generally mean you get to spend more quality time with friends and family and feast on delicious...
Advertisement 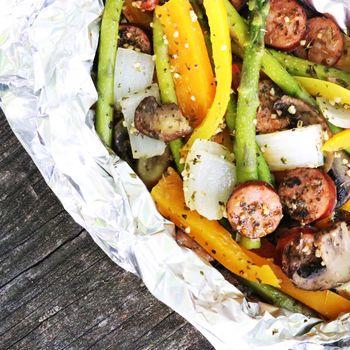 Food
Satisfying Keto Snacks That Are High In Fat

Food
Keto Recipes Made With Chicken

Food
Super Bowl Recipes You Can Make In An Instant Pot