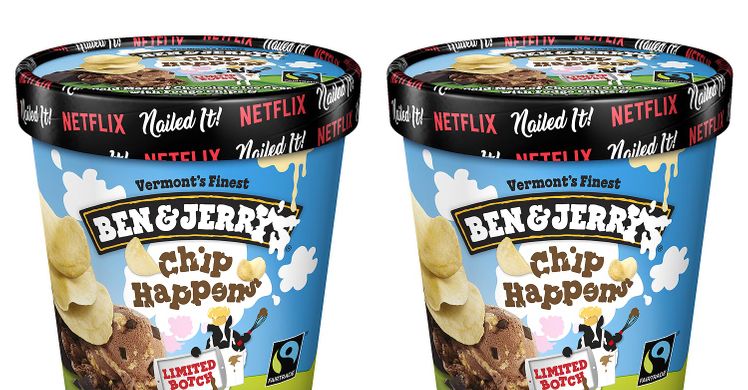 Nothing quite beats watching your favorite show with a bag of your favorite potato chips in hand, right? Well, get ready for a new way to snack! Ben & Jerry’s just unveiled their most interesting flavor yet and it’s called Chip Happens! Their latest flavor is hitting the freezer aisles in stores across the U.S. right now. But be sure to snatch a pint once you find because this limited batch won’t be here forever.

Now you must be wondering what the heck is chip flavor anyway? According to Ben & Jerry’s website, the new Chip Happens flavor features their classic chocolate ice cream with pieces of fudge chips, and crunchy potato chip swirls mixed throughout. It’s basically the perfect balance of sweet and salty flavors and you seriously need to try it!

The new flavor is Ben & Jerry’s latest collaboration with Netflix. The flavor is inspired by Netflix’s original baking competition series called, Nailed It!. For those that haven’t seen the show, it stars amateur bakers who put their best efforts forward to recreate edible masterpieces! Although, the end result often ends up being a hilarious fail. But hey, Chip Happens, right?

Ben & Jerry’s is consistently thinking up new and exciting innovations to keep us on our toes. We can’t wait to see what they have in store for us next!

ICYMI: This isn’t Ben & Jerry’s first collaboration with Netflix. Earlier this year, Ben & Jerry’s released a new Netflix & Chilll’d flavor! Just like Netflix, the flavor features a variety of flavors to ensure there is something for everyone! From peanut butter ice cream to sweet and salty pretzel swirls and pieces of fudge brownie — what’s not to like? Better yet this flavor is also available in both dairy and nondairy versions which means more people can join in on the fun!