The plant-based food trend isn’t going anywhere and more restaurants are adding new innovative products to their menus to meet their customer’s needs. Burger King just announced that they are launching their new, plant-based Impossible Croissan’wich nationwide! This delicious breakfast sandwich features a toasted croissant filled with fluffy eggs, American cheese, and a seasoned plant-based sausage created by Impossible Foods. The nationwide launch comes after a very successful test that took place back in January 2020.

According to Burger King’s press release, “After a successful test earlier this year in select U.S. markets, BK guests across the country can now get the same Croissan’wich breakfast sandwich they know and love with a delicious Impossible Sausage Made From Plants,”

“This new menu item makes Burger King the first national restaurant to offer Impossible Sausage Made From Plants on a breakfast sandwich,” it continued. “The all-new, limited-time-only Impossible Croissan’wich features a toasted flaky croissant, fluffy eggs, melted American cheese and a seasoned sausage made from plants from Impossible Foods.”

it’s not a dream, but it is time to wake up. the Impossible™ Croissan’wich has a patty made from plants and is now available at BK.

The new Croissan’which is available at participating BK locations with a suggested retail price of $3.99.

ICYMI: Last year Burger King launched an Impossible Whopper nationwide. Much like the Croissan’wich, the plant-based Whopper was first tested in select restaurants but after a very successful test, the chain launched the burger nationwide! There are many ways to get your hands on fast-food plant-based goodness!

impossible? we eat that for breakfast. try our new collab with @ImpossibleFoods and get the Impossible™ Croissan’wich delivered for free with any $10+ order on the BK app. pic.twitter.com/7GRAZqY4AL 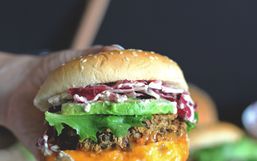 Vegan Burgers Even Meat-Lovers Will Devour
When it comes to eating a burger, there's a level of nostalgia involved and a lot of opinions.