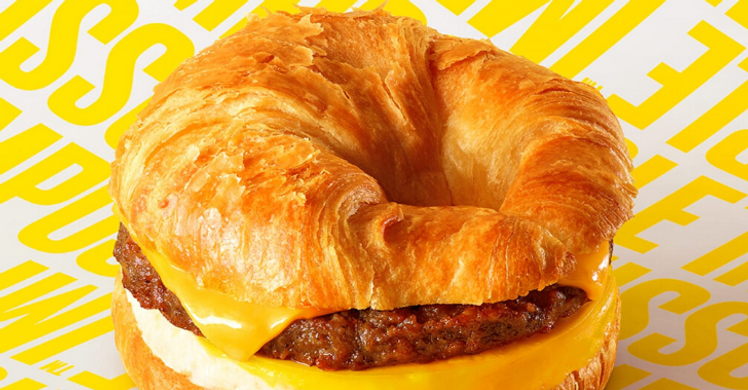 Move over Beyond Meat, there’s another plant-based meat subsitute company in town that is here to steal the spotlight! Impossible Food’s mission is to help individuals across the country indulge in as much meat as they want without sacrificing our planet’s resources by offering you plant-based alternatives. Impossible Foods has teamed up with Burger King yet again to bring you another enticing meal, but this time it’s serving up hot breakfast food! Burger Kind announced yesterday that they will be testing an Impossible Croissan’wich at select locations starting the end of January 2020.

The Impossible Croissan’wich features a toasted croissant filled with fluffy eggs, American cheese, and a seasoned plant-based sausage from Impossible Foods. While it does feature a plant-based patty, it’s important to note that this breakfast sandwich is far from vegan as it contains eggs, cheese, and 100% butter. That said offering customers more options is always a great idea.

“Impossible Foods began in 2011 with an ambitious goal: To drastically reduce humanity’s destructive impact on the global environment by completely replacing the use of animals as a food production technology. We intend to accomplish this mission within two decades by creating the world’s most delicious, nutritious, affordable and sustainable meat, fish and dairy foods directly from plants.” Said Pat Brown, CEO & Founder of Impossible Foods.

Delicious Breakfast Casseroles You Should Try
You don't have to spend hours in the kitchen to achieve a drool-worthy breakfast!